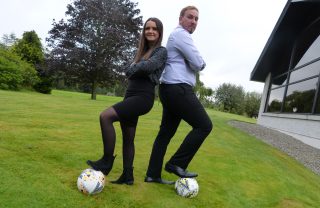 HR administrator Megan Dorward throws down the gauntlet as she challenges the local football manager to a match this Thursday.

The pair go head to head on the pitch this week to raise money for the Scottish Association for Mental Health (SAMH).

Megan admits it’s been a long time since she played football but says she’s not deterred by her rival’s footballing experience.

“The idea started as a joke but our competitive streaks have kicked in so we thought we’d bring it to life,” she said.

“As manager of St. Laurence football club, David thinks he has the upper hand but I have every faith in my team.”

Each captain has drawn their teams at random from a pool of their colleagues who are eager to get in on the action.

Using the grounds of one of Macphie’s local school partners, the match kicks off at 7pm on Thursday night at Mearns Academy in Laurencekirk.

Spectators are welcome to come along and support the teams for a small donation to SAMH on the door.

The football match forms part of Macphie’s partnership with the SAMH. Collaborating with the charity, the manufacturer has been putting mental health on its agenda since launching their partnership last year.

From crafting to cooking, the Macphie team has come together to raise over £8,700 for the Scottish charity so far.

As well as raising money, the team is using the partnership to raise awareness of mental health amongst its employees.

Encouraging the entire workforce to understand mental health and make the conversation around it more comfortable.

It has hosted employee information sessions with SAMH, shared tips and advice on promoting good mental health and most importantly, provided clear guidance on where to go for help.

UPDATE: It was a close game but with a final score of 7-6, David’s team came out on top and with over £600 raised for SAMH, both captains left smiling.