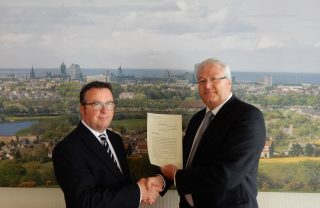 We’re delighted that our Head of Food Applications, Alan Leith, has been named a member of the Aberdeen Bakers Incorporation which makes up part of The Seven Incorporated Trades of Aberdeen.

Alan was admitted as a Burgess of Trade on 29th June. Presided over by the Lord Provost with the full Council in attendance, Late Deacon Convener David N Parkinson, standing in for Deacon Sandy McKinnon, proposed Alan for admission as a free burgess of the City.

After paying the customary dues of five shillings Scots in a white purse to the Lord Provost, Alan was presented with his Burgesses Certificate at the City Council Chambers in the Towns House.

The Seven Incorporated Trades of Aberdeen aims to deliver on its historically grounded commitment to skills, people development and education as well as raise funds for the advancement of young persons living in the Aberdeen community.