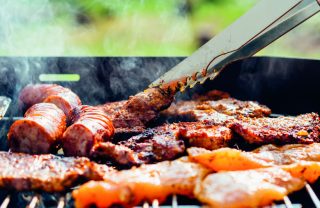 The growth in the UK consumption of fish at barbecue time shows that consumers have discovered the goodness in grilling fresh fish in the open air, much like our southern European friends have been doing for decades.

With above-average UK sunshine in 2016, it’s no wonder there were 115.3million barbecues across the year.

This means every UK citizen sat down to some charcoaled goodness nearly twice a year.

Traditionally barbecues were a planned event with hours or even days of preparation, but as the consumer seems to have ever less time, spontaneity reigns.

With 64.9million mid-week barbecues last year – a rise of 18% – the impromptu after-work get-together seems to be gaining ascendancy over the weekend barbecue.

All this impulsiveness needs solutions and while consumers want the perfect barbecue food, they want it easy and they want it quick.

With the spend of barbecue baskets being five times higher than the average, consumers are now showing they are willing to spend.

The average consumer spends £35, which is double the amount five years ago.

And the quality must be right. Never has it been more important to provide Instagram-ready food for your guests as barbecues are right up there with a fine-dining dinner party.

Fish on the increase

Choosing the right combination of food is also important and there were some big changes in popularity for certain proteins.

Chicken and sausages declined in 2016, with a drop in consumption of 6.3million and 2.5million portions respectively, which is being attributed to the reduction in multi-buy offers across grocery retail.

Burgers grew by 32.7%, but they are becoming more than just a barbecue favourite. Many Brits now eat them throughout the year, supported by the massive growth of burger chains on the UK high street.

Fish grew substantially last year with 5.3million portions being served up – an increase of 50.7% – as consumers look for healthier alternatives to red meat.

Equally, UK consumers now have a large range of fish to choose from, which is encouraging them to expand their palates and try different seafood.

As the love continues, barbecues no longer occupy a set period of time in the summer and the flavours and methods of cooking have become part of year-round dining.

Britain’s growing taste for Americana has promoted an increase in barbecue cuisine, demonstrated through successful launch of burger chains and American-style diners such as Ed’s Easy Diner and Byron Burger.

Although key flavours in the last 10 years have been spicy, Chinese and piri-piri, Korean barbecue cooking has seen a growth across the UK.

The flavour has been transferred through American BBQ chefs using Korean marinating techniques before cooking the meat.

Korean barbecue can be used simply as a sauce, but equally can replace the traditional Chinese marinade on pork loins or piri-piri chicken wings.

If you’re looking forward to what flavours are key for barbecue season 2018, Macphie has an expert support team that can provide you with ideas and concepts. Contact Keri Cummings, Category Marketing Manager for further information.

Looking for some bread inspiration for your grill? Take a look at our bread, roll and bun products