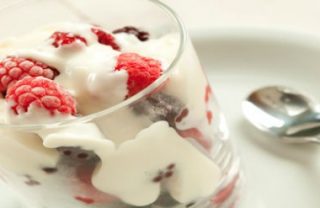 Supermarket audits revealed that raspberry, strawberry, blackberry and blackcurrant are used the most in mixed berry products and apple is used for bulking them out. Blueberries and cherries are being found in more products especially cakes, yogurts and drinks.

Provenance is key – consumers want to know where their food is from and provenance adds a luxury element food products.

Blueberries are in season in the UK from May to October. One serving of blueberries contains 14% of the suggested daily fibre and 24% of the suggested daily intake of Vitamin C. Blueberries can lower levels of LDL (bad cholesterol), reduce the risk of heart disease and inhibit the growth of breast cancer cells. People tend to eat blueberries because they like the flavour rather than its health benefits; they are an added bonus. In the USA blueberries rank only second to strawberries in popularity of berries.

Blackberries (aka brambles) are in season in the UK from the end of July to mid-October. Blackberries are full of vitamin C; during World War One, children in Britain were given time off school to collect blackberries for the production of juice which was sent to soldiers to help maintain their health. There are over 2,000 varieties of blackberries found throughout the cooler regions of the world but they are more popular in Britain and Northern Europe.  Firmenich, a Swiss company who analyse and produce fragrances and flavourings named blackberries as their ‘Flavour of the Year, 2014’.

Hybridisation – Strawberry flavoured grapes have been available in limited quantities since 2011 but due to positive response in America production increased from 2 acres to 100 acres in 2013 and 200 additional acres have been planned for 2014. Tesco had limited amounts of strawberry and tropical flavoured grapes in 2013, they announced that other varieties including grapes which taste like mango and lychee would be available in 2014. Waitrose are temporarily stocking, ‘fragaria Moschata’, a berry which fell out of favour in the 19th century. Waitrose are calling it the ‘bubbleberry’ as it is said to taste like bubblegum; they have suggested serving the berries with ice cream and marshmallows or frozen with melted white chocolate. From September Waitrose will be selling mango-flavoured grapes. Sales of grapes have increased 17% y-o-y with unique varieties showing the greatest increase.