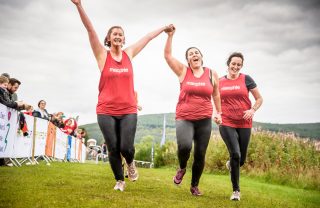 Employees from across the Macphie business took part in a gruelling 10k obstacle race recently in Banchory – known as The Beast – all in the name of charity.

The race has been going for three years and Macphie has entered a team each year. This year, we raised £1355 for Bowel Cancer UK. Macphie has also raised over £1600 for other charities this year through various activities such as bake sales.

We donate £10,000 every year to local and national charities and other good causes such as Cancer Research UK, Friends of Anchor, Scottish Huntingtons Association and the British Heart Foundation, as well as international fund raisers such as the Red Cross Nepal Appeal.

The team’s brave endeavours were reported in British Baker online which you can read by clicking the link.