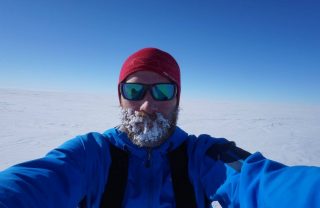 At Macphie we’re passionate about corporate social responsibility, driving a number of initiatives to support the local community. Most recently, we donated £1000 to Marie Curie after hearing the inspirational story of Luke Robertson who became the first Scot to ski solo, unassisted and unsupported, to the South Pole in aid of the well-known charity. The young explorer had first-hand experience with Marie Curie after being diagnosed with a brain tumour in 2014 and wanted to do his bit to give back.

Now that he’s returned safely, we asked him how he got on…

What motivated you to embark on this South Pole expedition?

I certainly had no shortage of motivations. My time spent in hospital undergoing brain surgery in 2014 made me want to inspire others to overcome challenges in their own lives or to take the first step in changing a part of their life to achieve a goal. I also wanted to fundraise for Marie Curie; a charity very close to my heart. The donations, messages of support and well wishes I received were very humbling and meant that I had all the incentives I needed to push through all kinds of barriers over 730 miles, before eventually reaching the South Pole.

How did the funding from Macphie support your expedition?

The funding from Macphie was incredibly generous and made me all the more determined to reach the Pole. All those funds went directly to Marie Curie, who provide care and support for people living with any terminal illness and their families. Their nurses work day and night providing hands on care and emotional support and I have seen first hand the amazing work carried out by the charity. I would like to say a huge thank you to Macphie for all that support.

What was the biggest challenge faced during the trip?

The biggest challenge I faced was one that I came face to face with every single day. Taking that first step outside of the tent each morning was the most difficult part of that trip. Each morning was a real battle, particularly towards the end, as I climbed higher and the weather became colder. I found I was doing more and more tasks from the warmth of my sleeping bag and would sometimes take that little bit longer to tie my shoelaces. However, I would tell myself that I was not going to give up due to a little bit of cold weather, even though temperatures reached as low as -70c. As soon as I unzipped the tent door and took that first step into the unknown, everything felt so much better.

What was the highlight of your trip?

Actually reaching the South Pole after 39 days and making human contact for the first time in a month and a half was a highlight. I felt so relieved to have repaid the faith shown in me by so many. The most memorable day was probably Christmas day. It was a guaranteed White Christmas but it felt very special and I felt so privileged to have spent the festive period in such a unique environment. I spoke to BBC TV that day, reached the halfway point of the trip and heard the first different sound, one other than the creak of the pulk and the slid of my skis since the start of the trip, when a small plane flew overhead.

If you could, would you do it all over again?

Well it’s very easy to forget all the physical pain and psychological challenges and just focus on all the enjoyable parts when an expedition has been successfully completed. There’s no doubt those days were some of the most challenging but also the most rewarding days of my life. I would love to take on a similar challenge again, but think I would probably like to share the experience with someone else next time.