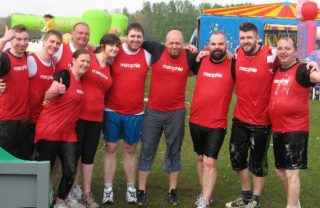 Last weekend a team of willing Macphie volunteers from our Tannochside site took part in ‘It’s a Knockout’ to raise money for St. Andrew’s Hospice.

The action-packed event took place at Strathclyde Park, Motherwell and saw over 4,000 people take part in a series of obstacles and challenges to raise money for charity.

The Macphie team claimed 4th place and raised an impressive £1,950 for St. Andrew’s Hospice which provides care and treatment for those suffering from life threatening illnesses. The team at Tannochside are aiming to raise £2,500 this year for their nominated charity and, following a Valentine’s Day raffle and pie sale earlier this year, they’re already close to reaching their target with more fundraising activities planned for later in the year.

Each year, Macphie donates a percentage of annual profits to local and national charities and employees are encouraged to take part in a range of fundraising events. Next month, a group from our Glenbervie site will be taking on Pretty Muddy in Dundee for the second year in a row, a 5k muddy obstacle course, in support of Cancer Research UK.