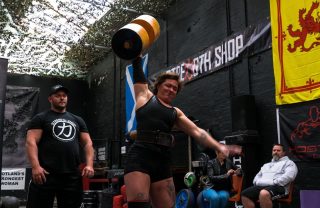 A weight has been lifted from a local powerlifter’s shoulders as her employer steps in to lighten the load.

Nicola Ann Bennett from Auchenblae is representing Great Britain at the World Powerlifting Championships next week in Slovakia following a donation of £250 from Macphie.

Nicola has been working at Macphie since February and qualified for the annual powerlifting competition which started this weekend but the cost of attending the overseas event was a heavy load.

“I was thrilled to qualify for the world championships but the cost of travelling to these events is high,” said Nicola.

“I didn’t think I’d be able to afford the flights and accommodation until Macphie stepped in and offered to cover the cost.”

“I started going to the Asylum gym in Laurencekirk last year as a way to keep fit and give me something to focus on,” she said.

“It was there that I got the push and the guidance to progress with weightlifting. I seemed to have a knack for it and I’ve been so lucky with the support I’ve had from the guys at the gym.

“This competition will be a bit different for me because I prefer to compete in Strong Woman events. They’re less about the weight you can lift and more about how quickly you can do it.

“Powerlifting is more intense, focusing on your strength and technique.

“You have three judges surrounding you from every angle, checking if your squat is deep enough, for example, or you’ve paused for long enough.”

On top of her full-time position as storeperson at Macphie Nicola trains five days a week for up to two hours. As the competition gets closer, the pressure is heating up.

“This week, I’m cutting out carbs and drinking a lot of water to make my weight category,” she said.

“Weigh-in is 24 hours before the competition starts so as soon as that’s done, I’ll be loading up on carbs and protein.

“We’ve mixed up my training plan, too.

“For the last few months it’s been all about upping the weights and increasing the intensity. However your body takes up to 10 days to fully recover after these really heavy lifts so leading up to the competition, I’m training with lighter weights to let my body rest.

“It’s tough, because the lack of carbs means I feel hungry a lot of the time and reducing the training at the same time means my body has no idea what’s going on.”

Nicola competes in the female heats on Monday (21 Oct) and travels to Slovakia this weekend with some of the other 73 members of Team Great Britain.

She won’t have much time to relax when she returns.

Not only is she joining her colleagues at STOMP – a charity fundraising race organised by the Scottish Association for Mental Health (SAMH) – on 26 October, she has also qualified for the Arnold Sport Festival Strong Woman competition in Ohio in March 2020.

“The festival was started by Arnold Schwarzennegger and it’ll be the first time I compete in an event that’s over more than one day,” she said.

“Then in May I’m competing in Scotland’s Strongest Women in Motherwell.”