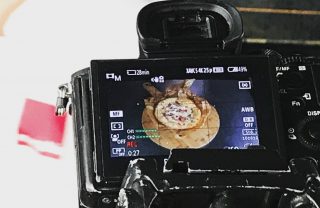 It is all in the edit this week as Macphie launches a series of videos showcasing some of its top-selling products.

The five short films explore the versatility of the company’s core product range as these behemoths of their branded range step into the limelight to show just how good they are.

Each video puts one product through its paces in five separate recipes. From the traditional to the on-trend, this makes 25 recipes in total that the team lovingly created for the camera.

Filming took place over two days and called once again on the expertise of Blue Monday, who produced the Macphie in a Minute video.

Head of Communications Joanna Fraser said: “It was a hectic few days, not least because there was so much going on, and all at different stages.

“So while we were filming a chef making stroganoff, a baker was whipping mallow, with another co-ordinating baking times and a second chef was preparing the final flourishes.

“But team Macphie triumphed and it turned out to be a pretty slick operation.”

The films show the company’s Softie concentrate being plumped into brioche and griddled as za’tar spiced flatbread.

Bechamel is the hidden star in dishes from curried cauliflower soup to croque monsieur, while Mactop makes an orange & chocolate semifreddo and a creditable cranachan.

Lemon Sensation gives us cookie sandwiches and a terrific tiramisu, while Demi Glace is brilliant in beef and beer pie, as well as French onion soup.

Joanna continued: “At Macphie, we’re renowned for the reliability and quality of our products.

“We’ve long been known as ‘the vital ingredient’ but in this series of videos, we prove we are also the versatile ingredient.

“These short films show the real potential of our core product range, and give a real flavour of Macphie.”