One man went to tow - Macphie 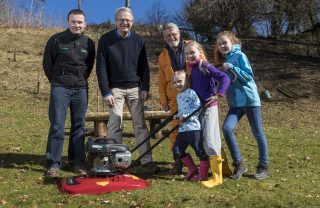 It was a case of one good turn deserves another as Macphie donated a mower to a local community at the weekend.

Chairman Alastair Macphie handed over the machine at the Auchenblae clean-up day in the village park on Saturday (March 24).

The donation followed a snowy rescue mission by a member of the Auchenblae parks committee earlier in the month.

Bernard Melsom came across two lorries stuck on a hill in the snow as they tried to get food ingredients from the Macphie factory to a Scottish distribution hub.

Hitching the lorries to his Toyota Landcruiser, which had snow chains fitted to its tyres, he towed them up the hill one at a time, getting them back on track.

Described by one of the lorry drivers as “a true local hero”, Mr Melson was reticent about his snow tow mission, saying it was “no big deal”.

However a couple of weeks later, when the Auchenblae parks committee realised their old hover mower had not survived the winter, Macphie stepped in to foot the bill for a replacement.

Alastair Macphie said: “The ongoing strong relationship we have with our local community is very important to us and we are delighted to be able to help with this donation.

“The time and effort that Mr Melsom took to help out the two lorry drivers and get our product back on the road shows that community spirit is alive and well.

“This is also clearly demonstrated by the many volunteers who turned out to lend a hand in the Den at the weekend to keep their village looking so beautiful.”

More than 50 volunteers turned up for the annual Den Clear Up Day, which helped get the public park ready for summer.