Employees raise £10,000 for charity of the year - Macphie 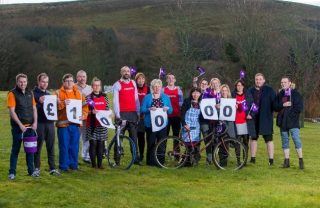 Macphie employees have raised over £10,000 for a national dementia charity.

Our aim was to raise £10,000 for Alzheimer Scotland by March 2018. Starting in April 2017, the year ahead saw staff from all departments work together to reach the target.

A technician swapped her lab coat for running shoes to participate in a 5km colour run while the IT team raised an eye-watering amount getting their legs waxed.

The contribution will support a range of services provided by Alzheimer Scotland.

This marks the first year the business has supported a nominated charity and it’s a great achievement to have reached.

“The greatest amount raised was by the Pedal for Scotland group, raising £2,000 with a 45-mile cycle. However, from baking to activity days, our employees have worked hard to raise this remarkable amount of money.

“We are delighted to have helped such a worthwhile cause and at the end of March our total was just over £10,400, which was the icing on the cake.

“At Macphie, the company donates a percentage of its profits to local good causes every year, but on this occasion, it was the enthusiasm and hard work from our employees that allowed us to reach our goal.

“A large portion of our employees have been affected by dementia, whether through a family member or friend. I believe this was the driving force in raising this money, as our employee’s charity of their choice.”

Sarah Geoghegan, an advisor for Alzheimer Scotland Dementia, expressed her gratitude saying: “We are so grateful of the support shown by all the Macphie employees and this funding will make such a difference to the families living locally with dementia.

“The funds will help support our dementia advisors, our 24-hour helpline, and a range of services provided locally to help people live better lives and not face dementia alone.

“Everyone at Alzheimer Scotland would like to thank Macphie for all their efforts.”