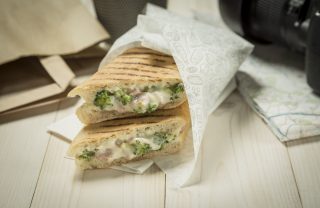 Last month we highlighted that 37% of Brits will get excited when they see Christmas sandwiches on sale, which got us thinking about sandwich trends a whole lot more.  With many on-the-go retailers having added new sandwich offerings onto their autumn menus it was interesting to notice one cuisine in particular currently dominating the shelves – American.

So, what makes a sandwich exciting?

Gone are the days when a sandwich was a dry piece of ham in the middle of two pieces of buttered white sliced bread.

Looking at the selection of sandwiches available at the moment, it is clear to see American influences strongly coming through:

Of course, the more traditional fillings such as ham and cheese, tuna and cucumber, cheese and pickle and of course egg mayonnaise are still prevalent, but there is certainly more consumer choice than ever before.

A great alternative to mayonnaise, Macphie Bechamel with butter sauce can be used in sandwiches, wraps as well as toasties.  Find out more about this versatile and vegetarian ingredient here.

As the nights get darker and we get closer to Halloween there is no doubt that it is pumpkin spice season again.  It is not just coffees that are inspired by the flavour, the New York Bakery Co has launched pumpkin spice bagels and if you really wanted to immerse yourself then you could spread Pip & Nut’s new pumpkin spice almond butter on those bagels.  We have not spotted this flavour trend hitting on-the-go sandwiches yet but don’t imagine it will be long until it does.

Christmas sandwiches are starting to hit the shelves, with Tesco announcing its range within the last few days which includes a few new ideas for 2019 including a turkey & stuffing yorkshire pudding wrap, a turkey curry & bhaji wrap, a gammon & piccalilli sandwich and a festive feast wrap (a vegan alternative to the classic Christmas sandwich).

Quorn reacted to the demand for more meat substitutes and vegetarian options in the on the go channel recently by introducing a selection of sandwiches and wraps.

Pret has recently announced it is are launching four vegan versions of its top sandwiches as well as open a fifth Veggie Pret store.  That said, when we say “have announced”, what Pret has actually done is to ask its social media followers which of its classic sandwiches they would like to see “veganised”.

Can you still call it a sandwich if it is not on sliced bread? Absolutely.

The food industry may split them out in many of the reports but the average consumer doesn’t – Greggs clearly agrees with us as you can find rolls, baguettes, oval bites, toasties, wraps and of course bread in its sandwich menu.

Lunch is still the most common time for sandwiches to be consumed but recent research shows that year on year, consumption of sandwiches has increased at breakfast and lunch time but fallen in snacking.  A recent survey by Delifrance showed 37% of people eat breakfast out of the home at least once a week, with an average of £3-4 being spent on grab and go and £6-10 when eating in.

With health still high on consumers’ minds, the number of breads targeting this trend is on the increase.  Whether it is high fibre, low carbohydrates, gluten free, sourdough, brioche or rye amongst many more options, it is fair to say that consumers have never had as much choice.

Macphie has a range of bread including Seeduction® Multiseed bread which is packed with sunflower seeds, linseeds, pumpkin seeds and oats which can be used to make loaves, rolls and croissants.

According to recent research, the most common reasons for choosing where they buy a sandwich is food quality or taste; good value (try buying a sandwich without a meal deal offer these days) and previous experience.  Sustainability is becoming a serious consideration for consumers.

What is it packed in?

Consumers are becoming more and more aware of packaging, something we are conscious of and have worked to remove 3.2tonnes of plastic waste out of the system with a recent development.  The number of brands making the switch to packaging with the environment in mind is continuing to grow at pace.  Dozens of brands in the OSC2 compostable packaging collaborative have pooled their efforts to make advances in flexible product pouches.

There are more and more alternative packaging options on the market such as food wraps made from beeswax.  It may not be long until we see consumers being rewarded for bringing reusable sandwich packaging with them in the same way that there is with coffee cups.

So, what does make a sandwich exciting?

To keep consumers coming back for more, it is important to keep the fillings on offer fresh (no pun intended) by having a good selection of seasonal and traditional offerings as well as ensuring that cuisine and flavour trends, such as the current American influence, are readily available and something you shout about.  After all who wants to eat the same thing for lunch every day.

We do often wonder what happens now to the middle of cucumbers since you rarely find them in a sandwich…..

Find the perfect base for your sandwich:

If you would like to get insight and inspiration delivered straight to your inbox every month – no need to go out in the cold to get it – then just click the link below to sign up to our newsletter.