The best days are sundaes - Macphie 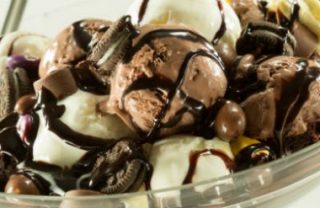 This July is National Ice Cream month and we’ve got some insight to help you make the most of it.

With estimated sales in 2015 of £1.1 billion, ice cream as a dessert is becoming ever more popular with Mintel reporting in June 2015 that 8 in 10 adults eat ice cream with 55% of consumers eating ice cream as a treat.

Keri Cummings, category marketing executive says: “Sundaes were one of the biggest menu trends in 2014 and this is likely to continue in 2015, with foodservice outlets recognising their value. ‘Twisted Classics’ are regularly featured on menus to appeal to consumers nostalgic side by having a recognised desserts mixed together. For example, the Apple Crumble Sundae- vanilla ice cream, apples, breadcrumbs and toffee sauce”.

Consumers want a premium and personalised experience with different options for flavour and toppings. An example of this is Pizza Hut with their Ice Cream Factory, which allows consumers to build their own sundae. Other food services outlets are also offering high-end gelatos in simple on trend flavours that make ice cream more adult friendly.

Although the traditional British ice cream parlours still exist, consumers are also becoming more aware of the different types of ice cream and, as the British food services chain become more diluted with European influence, there has been a rise in the number of gelato makers opening. The best examples of these can be found in London with chains such as Gelato Mio and Zazà.

Consumer flavour interests are changing as well; flavours such as speciality chocolate, salted caramel and passion fruit have seen growth over the last 3 years. Mintel’s most recent report on Ice Cream & Desserts in the UK, published in May 2015, says “Although vanilla, chocolate and strawberry remain the three most popular flavour components in the region, the last 12 months has seen a rise in coffee, dessert and alcohol inspired flavours catering to adult palates”.

Keri continues: “The Macphie range of O.T.T® dessert sauces are perfect for using over ice creams and provide a variety of delicious flavours. For something a bit more premium, ku-li® offers a range of fruit coulis that contain over 50% fruit puree and add real flavour and value to desserts”.