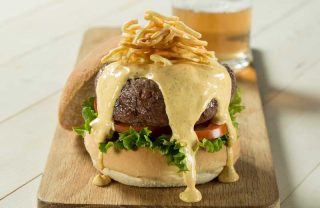 The UK was hailed as the barbeque capital of Europe in 2013, cooking up over 125 million barbies, and the trend is showing no signs of slowing down in 2015.

Some high-end restaurants are even installing their own wood-burning grills to add flavour and authenticity to their dishes which is great for enticing customers through the door.

Catherine Low, Research Analyst explains, “The BBQ market has been largely influenced by the street food revolution and the increasing popularity of American foods and flavours to stand out from the crowd. Dishes have to be big on flavour, quantity and heat levels, which are continually being cranked up. As consumers are looking to mix up their favourite cuisines as we’ve seen with Brazilian/Japanese fusions, there is still plenty more this trend has to offer.”

The Food People have predicted an increase in spice levels as consumers look further afield to Asia for new flavours. Za’atar, baharat, wasabi and szechuan, amongst others, are set to make their way onto our grills. This is also being used to add a twist to classic toppings such as hot mayo and there are plenty of opportunities to add value with sauces, coleslaws and toppers.

Catherine continues, “Much of the BBQ trend is influenced by customers wanting to have more control over their plate such as portion sizes, toppings and sauces. However some key trends are set to continue, for example smoked flavours.”

While pork has been a firm favourite for ‘pulled’ meats (appearing now as a staple on menus as a burger with slaw or as a topping for beef burgers), meats such as salmon, chicken and turkey are the latest proteins to join this trend. Indeed, we can expect to see fish taking a bigger role in BBQs with the introduction of sliders and burgers using ingredients such as crab, salmon and hake.

However, it’s not just the meat eaters among us that get to enjoy a BBQ. Supermarkets are increasingly catering towards vegetarians by creating exciting new flavour options for sausages such as butternut squash and smoked paprika.

Fruity flavours are also coming through with combinations such as BBQ orange & thyme, fruity bourbon drizzle and sweet mango flavours all appearing on supermarket shelves. This is also impacting bacon as a burger topping with varieties such as applewood smoked, bacon jam and candied bacon seeing increased popularity.

The summer sizzler season is in full swing … time to get cooking!