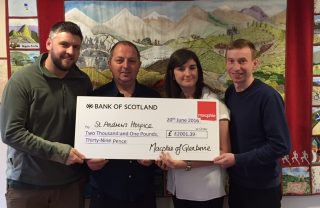 Members of the Macphie team visited St. Andrews Hospice this week to present a cheque for over £2000.

Earlier in the year, a team of employees from the Macphie Tannochside site took part in the ‘It’s a Knockout’ event in Motherwell to raise money for St. Andrew’s Hospice which provides care and treatment for those suffering from life threatening illnesses. The team raised £2000 for their efforts and the Macphie Charity Committee have agreed to donate a further £1500 in recognition of their achievement. Money was also raised by holding a Valentine’s raffle and pie sale earlier in the year, making a total donation of £5000 for St. Andrew’s Hospice so far.

The Macphie Tannochside team originally aimed to raise £2500 by the end of the year for their nominated charity. However, after exceeding their target after only a few months the team now aims to donate over £8000 in 2016.

Plans are already in place to achieve this with employees signed up to take part in Pedal for Scotland, a 55-mile cycle from Glasgow to Edinburgh.