Young chefs have the recipe for success - Macphie 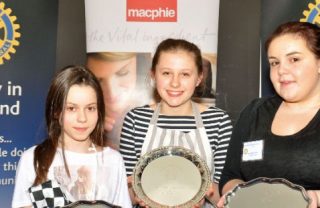 The annual Rotary Young Chef Competition took place recently with budding young chefs competing to win a place in the regional final of the competition.  The Macphie sponsored event was held at both Aberdeen and Dundee colleges.

Contestants from various secondary schools across Scotland, were set the challenge of creating a three course meal within two hours. The event was co-ordinated by Stonehaven Rotarian Mike Robins. Mr Robins said, “The Rotary Young Chef Competition is the only true UK wide cooking contest attracting around 6000 entrants each year in the 11–17 age range. They are judged not only on their culinary skills but also healthy choices, timing and costing plans, their work organisation and work practices. Many a restaurant would be proud of the quality our little cuisineres produce.”

sponsors Macphie of Glenbervie. Judge, Norman Brockwell, Business Development Chef at Macphie of Glenbervie, said, “It’s great to see future generations of budding young chefs rising to the challenge to create show-stopping dishes that would be more at home in a Masterchef final than a secondary school competition.” Derek Baird who judged the Aberdeen heat said, “I have been judging this competition for 5 years and every year the standards get higher and higher.”

The winners will compete in the regional final in Newcastle next month.